The last time I posted I finished with talking about how I at least have one good leg to stand on, which was pretty convenient because the next book I read was A Leg to Stand On by Oliver Sacks. Sacks was hiking one day and ran into a bull, and in his attempt to get away he basically fell down a large drop and destroyed his leg. Tendons ripped, ligaments shredded and his knee only bent backwards (Not great). He goes on to talk about his stay in the hospital and his recovery. As a neurologist himself he was finally able to identify with his patients and see it from the other side. The injury itself actually ended up provoking him to alter his research into the disassociation with a limb after surgery, like the one he experience. After his surgery when he woke up for some time he had no feeling or connection with his leg. Which I can attest it is a cool phenomenon, but only when it’s not happening to you. He makes a full recovery (relatively) and towards the end of the book a friend writes him suggesting that this was all part of his destiny, a destiny he had no control over but came out of it for the better. The gives me hope, especially since everyday I get further away from the day of the crash. And closer to some closure, minus the fact the guy skipped out on his last court date, but with a warrant out for his arrest maybe now he’ll actually get some jail time as that’s pretty frowned upon in the judicial system (or so I’m told).

As part of my “destiny” it just wasn’t in the cards to get on the bike before spring break. The weather was pretty crummy and it’s not that I wouldn’t have gone out if it was absolutely pressing but having my first time back being filled with curse words because of the bloody wind isn’t exactly how I want to start off, again. It’s not that I want this completely euphoric ride either, if it’s absolutely mundane I will take that, I just want at least some uncontrollable factors to be at least favorable. I’m just looking at it that it’s the first ride of the spring, most riders I talk to haven’t even been out yet because the winter has been so atrocious, so yah.

The last class I had before I skipped town for spring break the professor asked if anyone remembered the first time they put trust in riding a bike without training wheels. I’m not even sure what the question was pertinent to because at that point I stopped listening to think about the first time I rode without training wheels. Unlike my sister, who had my mom run over one of her training wheels, mine was by choice. It was at daycare with Suzie. It was a rush. One of those things you don’t think you can do and then you just do it and you’re like holy crap, I am the coolest person ever. Which is exactly what went through my 3 year old brain. I was so ecstatic that when I got home with my parents I had to show them, but  I’m not sure that they had full confidence in a crazy 3 year old with a blond fro and 25 pounds sopping wet. They didn’t let me ride in the street (which was probably a good move as we live on a hill) and instead made me go on the back patio (which I’m not sure was a better choice due to the stairs) but due to my impressive handling skills I was able to make the sharp corners. Since then I can remember obsessing about getting my older brother to let me ride his “big” bike with no kick stand. Hardcore. It makes sense now as I still ride one of his hand-me-downs, with no kickstand (not the same one had when he was 6, don’t worry). For some reason the fact that it was fitted for someone who is 6’4″ doesn’t detour me, as in my mind I’m taller than I am in real life. So at least some things never change.

I was talking to my strength coach for volleyball about altering our lift program to fit more to cycling and he talked about growing up and saving his money to buy a bike so his parents could no longer restrict him like  when they had to drive him around. He remember the freedom he felt and how cool he thought he was. Everyone seems to have a pure bike moment, when they were able to taste freedom for the first time.

The plane ride from Boston actually got me thinking, see the guy next to me decided to would be an opportune time to eat a Tuna fish sandwich, which triggered my motion sickness for the first time in years. See, when I was a kid I would get it really bad, so bad that there are family vacation pictures where all I have on is a really long shirt. My parents would pack extra clothing even for an hour trip and I could easily acquire the front seat with a few gag reflexes (Yes, Frank I was faking a couple of times). But through out the years I’ve pretty much grown out of it, but I still take precautions, like not eating before I fly and checking to make sure there is a “motion discomfort bag” in the seat pocket. Even now my anxiety about biking and being around cars has decreased, comparatively but I know that it will probably flare up at inopportune times but I can prepare for that. Eventually it will just become a memory that isn’t associated with an increased heart rate and sweat palms. But until then I’ll carry a couple of extra napkins to wipe the perspiration and get on with my life. 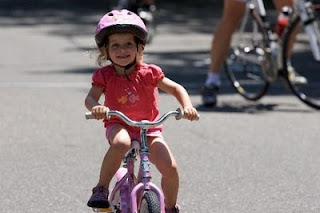