The gun went off and because the bullet didn’t hit me I did what everyone else did and started the race. Oh my gosh, what have I done was my first thought as I started lumbering up the steep incline. I had even talked some of my coworkers into doing it. “It’s so much fun! Way better than the 100! It’s only 50 miles.” Yah… about that.

Last year when I was training for 100 miles, 50 miles seemed like another training ride. When all you have is a 50 miler it’s a different story. While I had raced the course before it still felt foreign most of the time. The rain the day before had saturated into the ground making spots more difficult and on the initial climb up on the first 10 miles there was still quiet a bit of water running down. It rendered the course more difficult than before as the single line to take was forming a small river going down. It wasn’t terrible when riding, but with it being muddy and slicky, towards the top many were walking on the bank of the road to avoid getting their shoes dirty. I didn’t try to be a hero in any sense and got off and found my place in the line.

I was elated when we reached the 10 mile mark and made the turn to begin the descent into the first aid station at mile 13. I didn’t stop at the aid station, because I didn’t last year (and nothing ever changes) and it seemed like vulchers with everyone else pillaging. Muh, I have food and I’m still okay on water were my thoughts. The next descent is into what I used to think was the enchanted forest, because how I remember it is you descend, climb a little bit and then descend into the half way point. Not even close in my mind I took about 14 miles out of the course and found it to be a much longer path to the half way point. This was not the case as I realized we were far from half way and the trudge brought more hiking and more misery. I descended only to begin climbing again, which last year I thought was “the best!” and this year I thought I may have hit my head harder than I thought if this is what my definition of fun was.

The forest opens up as you begin your last climb before the halfway point. I was not happy to see it. At this point the leaders had already passed me heading back in and seeing the little ants marching up the hill side only made my heart sink.  I begrudgingly shuffled on.

Getting to the turn around point wasn’t bad, except that the whole way I knew I was going to have to ride it again, except going up. After the turn around point the pitch back up was ruthless. Not only do I hate to hike but I hate it even more when I’m having to push my bike up a steep grade. My legs ached and I still wasn’t sure how I thought that this was fun. At all.

Making it to the last aid station was a relief and at this point only having a gel and banana I pulled over to load up and became one of the vulchers I had noted earlier. Only 13 miles left, I can do this. I checked my time, I hadn’t quiet remembered where I was at time wise this time last year but definitely was not set to hit my mark. The three miles up to the turn off to begin the descent seemed a lot longer going up than it did going down. I was still on the climb up when my time reached 5:55 (the time I had finished in last year). I almost starting crying, almost. This is awful, absolutely dreadful. I should just stop but the only way to get back was to descend back into town on the trail, and that’s what I did.

The descent wasn’t exactly all descending and with about 6 miles left I saw a guy pulled over who had passed me early and stated “do it for the beer at the finish”. I asked him if he was needed anything and he said he was cramping. I told him I had some gatorade he could have. He thanked me and apologized for keeping me. I told him it didn’t matter as I was already 45 minutes off my PR. Snarky, yes, but that’s where I was at. I even contemplated just pulling off to my car before getting to the finish line because I thought maybe a DNF would be better than what my time was going to be.

I didn’t do that, I finished. I wasn’t elated to finish like I had thought I would be. But was certainly appreciative that it was done and I had survived. I found the two coworkers I had roped into it, they looked about as defeated as I did, which made me feel better. I somehow ended up fourth in my age group with only a 25 minute difference between me and first place. I hung around for the awards ceremony because one of the people I talked into doing it ended up getting first in my age group. She got the ticket to Leadville (sidenote: totally rocked it this year). There was another spot up for grabs in our age group, but getting 4th didn’t exactly have me holding my breathe for it. The 2nd place girl had already won her place into Leadville and declined it. The third place girl hadn’t shown up to the awards ceremony. When they called my name for the golden coin to seal my spot into Leadville, I surprised myself with how excited I was to think about going back. I ran up and snatched it so fast there would be no mistake that I wanted it. 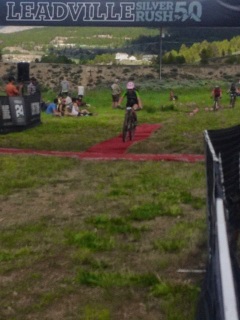 That means I’ll be going back to Leadville. After I grabbed the coin and signed my name my next thought was, “my parents aren’t going to be too happy about this.” The nice thing that happens with the coin is that they give you the option of signing up for this year or next year. With how my training has been going and how I’ve been feeling I knew that there was no way I wanted to do it this year. Which means I’m in for 2015.

I certainly haven’t thought too much about training going forward or really riding my bike too much. I spent the weekend of Leadville this year hanging out with this bunch at my family’s cabin. It was a much needed break and now it’s on to the next adventure. Cyclocross.

I still have more thoughts on the Kenai 250 but here are some initial ones — at one point I told Kevin I was going to finish or die trying (I definitely don’t remember this and can’t imagine being that dramatic 😂).
I haven’t done an endurance race in almost 3 years and despite my best efforts my body certainly isn’t where I left it before studying for the bar and taking a hiatus during COVID.
A year ago, I don’t think @rachelcheath could have convinced me to ski in a bikini at @resortalyeska — and it’s not that all of a sudden I have this great body confidence but I have this deep gratitude for what my body gave me this past year during COVID. Grateful to be vaccinated headed into this summer, if you still need to get a shot, Alyeska is hosting a vaccine clinic on May 23 and will give you a free lift ticket. Finally wrote some of my feelings about the past year in my blog (link in bio, if ya feel so inclined). If you have questions about the vaccine or aren’t sure about getting it, feel free to reach out, lucky that we could use the immunization strategies exploited against SARS and MERS to guide the design of the COVID-19 vaccines. 📸 @rachelcheath #Science  #CatchAirNotCOVID #SleevesUpForSummer #BeachDay #SummerButAlaskaStyle #ThanksForEditingThePhotoSoILookTan #GhastlyPale #ShotsShotsShots #HerdImmunity
Scheming about how we’re going to take the West Virginia skimo scene by storm next winter— but for now enjoying non-breakable crust and too early for popcorn skiing 📸 @waywardtraveler_ak #wehavelowstandards #abouttobelower #winterforever #springskiing #alaska #crustskiingadventures #allterrain
One year ago I got sworn in as an attorney (upgrade from the email granting me permission months earlier) and convinced my family we had to go to the best basement bar (The Downer) in town to get shots—now we’re waiting for different shots so we can return to consuming other shots (lolz)— basically this is all to say that life comes at ya pretty fast #shotshotshots #everybody #notjusthoseinwealthycountries #petitavocat #vaccineequity #spreadsciencenotthevirus #thedowner #lowqualityphoto #highqualitybar #alsopeople
1 year ago today the US recorded its first COVID-19 case, yesterday we passed the 400,000 death mark. Today there is hope on the horizon. #darkestbeforethedawn #hopeonthehorizon #bethelight #maskup #thenewvariantsarenojoke #spreadsciencenotthevirus #sciencematters #wordsmatter
%d bloggers like this: