It’s official, I signed up for the Whiskey 50…and got into law school (still waiting to hear from Harvard buuuuut I’m not holding my breath). It took less than a week to hear back from two schools (jury is still out if they even read my application- see what I did there?). It’s nice knowing that I at least have some place to go in the fall (once I figure out if that’s the cheapest place or the one with Whole Foods closest- only kind of kidding.) Knowing I’m in has made me definitely realize that the things I’m even slightly inclined to do-  I probably should just do them because the next three years won’t warrant as much free time to go ride my bike. 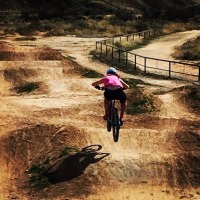 I took a break from thinking about law school to go to Fruita with some friends. We started with riding Friday in Buena Vista. Having never ridden the trails it is definitely

worth a trip back, if for nothing but the views. Fruita was great, for some reason I thought it was going to be warm and it was but not during the night in the tent, when I couldn’t feel my toes. Riding in the exposed hot sun is brutal- you feel like you rode farther than you did and you need more sunscreen than normal. All in all, it was nice to take a break and just ride and camp. I think I’m starting to see what the appeal is with going to the middle of nowhere and sleeping outside (but don’t get me any camping gear for my birthday- I’m not there yet).

I took Sully up to South Dakota for Easter. Unfortunately there aren’t any trails out my back door yet; but there are some cow trails that we were able to improvise on. We had only planned on riding around 2 hours (I had already ridden one when I met up with Sully). Somehow we ended up on the wrong cow trail (I know all trails lead home, but not necessarily the most direct way). We ended up on a ridge looking at the house and had to backtrack another hour to get back.

It didn’t hurt to spend more time on the bike but we’ll have to go back and really map them out (or get Wayne to redirect the satellites for us).


Last week was my biggest time wise spent on the bike so far this year. It required some creativity in getting all the time in with work- I realized I should probably eat something before taking off on a 4 hour ride (I already knew this) but sometimes it’s hard to get anything in at 6 in the morning. Working on it though. James pretended he wanted to buy brown rice hot cereal (because I’m allergic to most of the easily accessible breakfast foods) and said I could have some (isn’t he nice?)

Fundraising for World Bicycle Relief is going well, I’m at 20% of my goal! I have some more ideas in the works to get the word out- don’t forget you can still donate!
http://teamwbr.worldbicyclerelief.org/kate-ginsbach