I didn’t know what to expect walking onto the USD campus. I was pleasantly surprised by it all. The whole campus resides on one giant city block, which seems fairly easy to navigate given that the law school is in one building only. The meeting with the dean to discuss orientation options went rather smoothly. I was thoroughly impressed with how versed she was with Leadville, I had sent her the link before and we figured out some options. The rough plan is to fly out Wednesday and then fly back Sunday for the first day of classes. She said she would talk to the professors about not calling on me for the first week so I could transition and regroup after; law school is taught under the Socratic method so that was a relief to know, she just wants me physically there the first day of class. She was concerned about me missing a lecture on Thursday by the bar association on character and fitness to talk about the standards set forth about being in law school and a potential lawyer. I wasn’t going to mention it but then my dad intervened (I knew I brought him for a reason), “oh, her mother was on that board for 14 years so we can handle that.” or something of the variation. That settled it- that would be all I needed for a pass. We spent the rest of the afternoon meeting with a realtor and looking at houses. I’m sure I’ll feel much better once I figure out where I might be living so I can get things there sooner rather than later. 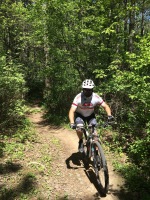 Sully and I then headed to Sioux City and rode mountain bikes, followed by road bikes in Madison, and mountain bike again in White Water, WI at the John Muir trails. All were pretty fantastic, except the road ride, it was a little bumpy.
The gravel metric was something else. I didn’t know what to expect, it’s not advertised as a race, but I

could have certainly been fooled. It started with a 5 mile police escort to the gravel; they stopped us and let everyone regroup i.e. let all the guys go pee on the side of the road before starting us again. The ride started and the only advice I had to go on was to stick with a group. Which I tried with the lead group, but they were real fast so I was off the back pretty shortly after. I was riding by myself for a good 5 miles, stuck in between the lead group and the group behind them, not wanting to slow down but unable to reel anyone in. I got lucky when the course took us through a farmer’s field, and it slowed some down that I was able to get back on to someone’s wheel. I kept thinking the first 15 miles that this isn’t going to be sustainable, I’m going to bonk at some point if this keeps up. Around mile 20 I was on my own again when a guy, Brad rode up and I stuck on his wheel, we worked to pull to the next guy and from there the three of us pulled up to the next two and then there was five of us. We stuck together till about mile 40, I chatted with an older lady who was only out there to see “if she could keep up with us youngins” she could. The course takes a 5 miles round about a lake which is over a snowmobile course, so you’re really just riding through grass which slows everything down substantially and we were able to catch more people and get strung out through the sections.

I saw Sully on the other side of the forested area right before the check in point. He told me his rider was winning and one of the guys we know from another shop was up ahead and to go catch him. I rolled into the check in point, got my wrist band punched (super casual), right as a big group was rolling out, I had enough time to grab a banana and start fighting to get up to them. It took a while but I finally managed to catch up and slowed my pace when I ran into the guy I knew, who was carrying beer and pizza in his frame bag. I rode with him for about 4-6 miles, enough time to watch him fall into the creek and then he started developing IT issues and stopped to do yoga. I did not have time for that. From there I hooked on to a group of Sram employees and let them pull me in the rest of the way. I did take pulls through out but by then there were seven of us so never for any substantiated time.

I was surprised when I finished that I had finished in the capacity that I did. I kept waiting to bonk. Unlike Colorado where a climb is followed by a descent, there were no sustained climbs followed by any descents it was just 68 miles of pure pedaling. I can’t say I didn’t like it, I’m still not sure if I liked it but I didn’t mind it. I don’t think I’ve ever spent as much time staring at the wheel in front of me as I did during this ride. I ended up averaging 17.2 mph over 4 hours- there aren’t official results but Sully thinks only 3 or 4 women were in front of me, not that it really matters….

I got bumped by a car last night when I was riding home with Sully. It seemed strange because he was pulling out but had stopped and I was crossing in front of him but only after stopping to make sure he saw me. I’m still not sure how he didn’t see me, I had look at him when he was looking at me, so maybe he thought I was clear on the other side already. I went and he rolled forward and then stopped and then rolled forward into me- still not sure how he didn’t see any of this happening. He just bumped my back end but it was enough to rattle me. I got off and was on the side walk looking at my bike to see if any damage was done. Everything checked out but I had no idea what to do so I did what seemed logical and just started crying. The driver rolled down his window to ask if I was alright, Sully said I was fine and I was and the bike was so he continued on his way.  I’m sure I’m just extra sensitive to it after my last one being a hit and run. After he left I completely lost it and  my leg started shaking. It’s not that I was injured or hurt in any capacity and I knew that at some point this would probably happen again. I was more just shocked by it all. It only left a scuff on my skewer but it popped in his bumper (so, I won, right?). At least he stopped to check on me and it was nice having Sully there to check out my bike right away. I took another minute before getting back on and finishing the 400 yards to our destination. My bike is fine, I’m fine, physically and mentally, it’s certainly a different scenario when the guy doesn’t drive off but actually stops to check on you. Fortunately these don’t seem to be an every day occurrence so I thought I would mention it; let me just repeat, mom, I am fine.
This weekend is the grand junction off road, which is 40 miles. I’m pretty excited for, I definitely feel like I’m getting stronger and from what I hear it sounds like a fun course- I forgot to register online (Chris, can I get on the same program as Bryan with you?)– but it doesn’t seem like it’s full and offers on the site registration on Friday. And if not I’ll just race bandit (haha, kidding, what did I just mention about the character and fitness of law students).