Heading up to Breckenridge for the Firecracker 50 was the perfect anecdote for spending the previous weekend in NYC; navigating traffic, tourists, and roller bladders (yes, that’s still a thing there- I know I was shocked too!) around central park while riding. NYC was great, in that I was able to catch up
with friends but it quickly reminded me why I didn’t remain on the East, too many people-all the time. Not to say Breckenridge wasn’t crowded, with it being a holiday weekend it was but at least I was in the mountains and riding my mountain bike.

I signed up for the team category with Carly, the fiancee of one of Sully’s riders. We had talked about it at the Grand Junction race but I postponed registering because I was having a hard time coming up with a team name. With only a few days left I put down the only name that seemed reasonable: Sparkle Unicorns. We both had a similar approach to the race; casual. I was grateful for, because I have the SilverRush 50 this weekend and didn’t want to blow myself up by doing two 50s in a row.

We started the race by going through the 4th of July parade in Breckenridge and then I pulled off and headed back to the house while Carly started the first lap. It’s a bit odd going second because you have a vague idea of when you will begin but no definite way of knowing. I gathered my things at the house and headed to the park to watch the pros come through and help do feeds for Sully’s team. Other than that I spent most of the time trying to avoid the sun and hoping that I didn’t miss Carly coming in. After and hour or so waiting in the park I couldn’t handle it much more and decided to at least put my ride clothes on so if Carly did show up I would be ready after she had to find me. 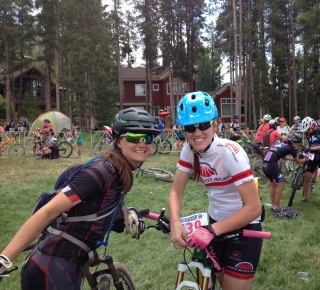 The finish is a really fun descent with switchbacks carved into the hillside so you can see the riders coming down. I saw Carly in full descent mode and edged out of the transition zone to get ready for the baton handoff, and by that I mean number plate. She rolled in and I asked her how it was, “really fun!” We fumbled to switch out the number plate and then I took off. I hadn’t ridden much of the course but had an idea after talking to people about it. The first few miles are a road climb up which I saw a lot of people starting to suffer on their second lap, I felt bad passing them because I was feeling fresh to death (and looking it too) so tried to give them a “good job” and maybe give them a little life to keep going. The road section is followed by turning off onto a drainage ditch that is wide enough to pass and only about a 1% grade. I cruised through the first aid station, remembering to eat and drink by the clock and continued on my crusade. I was really surprised by how nice everyone was when I tried to pass, nobody tried to out sprint me or be an ass about it which made it easier to keep passing. It was a fun course because I was either climbing or descending, not a lot of just flat pedaling which kept it interesting and moving fast. I saw Sully at the second aid station where I took a bottle from him just to get some water in before tossing it back to him.

The next section is the one I had been warned about by multiple people, Little French. It’s a loose rocky section that is rideable but one miss turn and you’d be off the bike. I started the climb up and sat on a wheel until they got off to walk and moved up to the next one. I wasn’t sure I’d be able to ride it all and got passed by one guy taking the B line around me so I thought I’d sit on his wheel to navigate the group of 5 walking in front of us. He got off his bike and hiked in behind them. I followed suit because if he didn’t think it was worth it I figured it probably wasn’t. Besides, it is good practice for Leadville. I got back on my bike before the top which put a little bit of time between me and the group behind me which meant I could enjoy the descent all to myself and I did, silky smooth single track that pulled you down the mountain.

The third aid station at mile 21 appeared sooner than I thought it would. I knew from earlier when Sully was there that it was about 20/25 minutes to the finish but there were also about 5 switchbacks

that you had to climb up to get down to the other side. I started climbing up and knew it wasn’t worth trying to get around anyone on that section so sat still until it opened up onto a straight climb that had enough room to pass. I made my moves to try and get to the descent sections sooner and was soon sitting on a guys wheel that seemed fast and warranted no reason to go around him. Right over the crest where we started the descent he scooted around another guy to begin his descent, I tried to follow by saying, “on your left when you get a chance” but he didn’t seem to find a chance. I thought that was okay because we had to cross a road and I planned on passing him there. We hit the road and I said, “Can I get around” but he sprinted back onto the single track. I then sat on his rear wheel for the
next 2 mile descent trying to find the chance to make my move. He took a wooden feature and I tried to sprint around on the trail but he cut me off. I sat on his wheel all the way through the finish and then he turned to me and said, “I’m really sorry darhling, I should have let you pass.” Maybe it was because of recent sexism I’ve been dealing with at work, or maybe it was because I hadn’t had coffee yet, but I unloaded on him, “Yah, you should have let me pass.” His response, “Well, I was just out there trying to give it my all.” “Oh, and I wasn’t?!?! I was and mine was faster than yours!! You should have let me pass because you knew I was girl and we aren’t in the same category, we aren’t racing against each other.” I was pretty livid, but Sully and Carly soon intercepted me and we were revealing in how much fun the course was and how we wouldn’t want to have do two laps. The guy who blocked me ended up doing a 40 minute slower lap time than me so joke is on him- because in the end he got beat by a girl–sucker!

I felt great through out the race, I started pretty conservatively and found my groove which served me well. My next adventure is the SilverRush 50 this weekend, I’m excited to see how it goes as the first year I did it I loved it and last year I loathed it so could be funnnnnn!

Recently someone asked me how I got into my work— I half joked that as a kid I loved the story of the diphtheria antitoxin serum run to Nome. So it was somewhat fitting that my first ‘off the road’ trip in Alaska was to Nome. I spent a lot of time thinking about the 1918 flu, the diphtheria outbreak, and the current COVID response. The trip came at a time of a lot of personal turmoil figuring out if I was going to leave Alaska. It didn’t give me a direct answer of what I needed to do, no voice in the sky giving me a concrete "thou shall do X" when all my spreadsheets had failed me #StuckInACell #WrongValues #GetIt
Got a little too sendy during the Sunday Morning Service — jk still can’t turn right and still a woooooo girl 📸 @dpisgreat #TheMostFun #NotSarcasmJames #TakeMeToDirt #SundayMorningService #OfferingToTheDirtGods #InQuadsWeTrust #GoodSpotToStuffMyFrontWheel #AlsoSpilledMyCandy #ThanksForPatchingMeUpSafeDave
Got into a different bag of tricks this summer, same treats (Sour Patch Kids). Celebrated another year around sun (#NotMyBirthday) with a 100 mile human-powered loop around Anchorage, dubbed the Jurassic Classic. Finally catching up from the summer mania and wrote about it if you’re interested (link in bio). Full Monty of mountain biking, hiking, pack rafting, and road biking and a few logistics 😂. The best part was how many friends we were able to join (and also all the help with the logistics) — who wants to sign up for the winter version? #TrickOrTreat #EnduranceAdventure #JurassicClassic #AndItWentLike #PackRafting #Hiking #CultureOfSafety #EndlessSummer #Backcountry #NoBears #AllTerrain
Dearly Beloved, we are gathered here today to get through this thing called “life”.
Not sure which took longer, riding or writing the Kenai 250. Still reveling in the small moments and the people that made it an unforgettable 47 hours— like the lady that gave me $10 worth of turkey meat (best I ever had). Grande for always being up to ride at least 200 miles with me multiple times this summer. Rachel for giving me quick bike maintenance tutorials and a bike repair kit (plus bike bags). @chainreactionalaska for making it so I wouldn’t need the bike kit. Jorge for the ride down and place to stay and the camaraderie on the course. Kevin who probably covered more miles than we did and seemed to be everywhere I needed him to be. And the countless people who reached out after to say they had so much fun watching my little dot move along. It’s a fun little event and I think everyone should do it. Link to finally read what racing my bike for 47 hours was like 📸 @adrianbarniak #AndItWentLikeThis #PutTheFunBetweenYourLegs #SorryMom #Kenai250 #IJustFeltLikeRiding #GirlsWhoRide #Alaska #LastFrontier #GoJuliana
One day soon, again we’ll wander, we will roam. But till then there’s adventure to discover here at Nome.
%d bloggers like this: