After Leadville I took two weeks off the bike and tried to settle into law school. I spent the first two days crying–this is why bonking in the woods is more ideal than surrounded by people. And a good idea to have your mom around so you don’t pack up the entire car and leave. It’s not that I don’t want to be in law school I do, or at least pretty sure I do. It’s just the adjustment from Colorado to South Dakota has been a lot harder than I thought it would be.

I still haven’t gotten into a groove with riding. I never thought that I would feel so claustrophobic in the vastness of the open prairie, but it’s a little unnerving with how much space there is. If someone is chasing you, there is nowhere to hide. I have no sense of direction and worry if I wander too far away I’ll just keep going. I also thought I would never miss climbing but boy I do. I used to think in terms of thousands of feet which has since been readjusted to hundreds, the most climbing I’ve had thus far is 761ft. over 50 miles (no shifting out of the big front chainring either…). Normally that would have equated to roughly 5,000 to 8,000 feet of climbing depending on the route. The one benefit is that it’s teaching me to pedal, because it’s so flat there is no coasting, just lots of pedaling.

I also experience my first cross race here (about an hour away from school), in years past I’ve only raced one or twice a season and always on my singlespeed but decided to do it on my geared cross bike. The cross scene is still developing here so the women all race together instead of in separate categories. Which didn’t make sense to me until I showed up and there was a total of three of us for the race. There aren’t too many men either so we raced with the men cat 3/4 and the master’s category. Racing for 10 hours is very different from racing for 30 minutes. I don’t usually incorporate a warmup before my races because

racing for 100 miles there is plenty of time to warm up. A 30 minute race, as I’ve come to find requires a proper warm-up, when the race was ending I felt like I was just getting going. *Note to self, riding to the start line is not a sufficient warm-up.* The course was all on grass with a sandpit going through a kids playground. It was fun, hard, and depending on how you look at it I either got last, 3rd or 1st. Last because there were only three women and I was last (dropped a chain but I was out of contention before that), or 3rd because there were three of us and that at least gets me a podium spot. Or first, because I was the only woman racing in my category. I was all set to make my Irish exit until I realized I locked my keys in my car and my phone was in there. So much for not having to talk to anyone. It was actually a blessing in disguise as I had to ask someone to use their phone and then wait 30 minutes for AAA to show up. Then I started talking to people, or more they started talking to me because I was the only one they didn’t know. It’s a small group of passionate people, and it’s nice to know that they exist over here.

I have yet to see too many people when I’m out riding though. Which is a little disconcerting as I’ve had many near misses with cars. Cars here just aren’t aware to watch for cyclists on the road. I’ve taken my cross bike out just to get away and onto gravel roads away from traffic which is great, except for when I flat or double flat as I did today. The first time about 4 miles down a desolate road that had posted “travel at your own risk” at the beginning which I thought would be perfect for the bike. 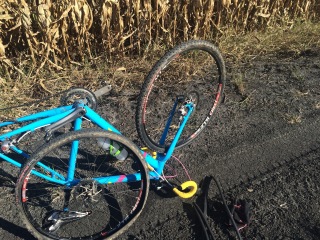 I’m still not sure what caused it and after using my spare tube decided to head back towards town. I was about 6 miles out still when I stopped to put more air in because it was looking a little low and needed to make it back to town because I have a very, very short list of people I know to call. I pulled over and touched the valve core when it blew. No! So I did what anyone would do 6 miles from town with not a soul in sight, I threw my bike and hand pump into the ditch and sat down to cry. Mid cry I stopped hoping that I would be able to find my hand pump when I finished because it’s a nice little one but then carried on for a few more minutes before digging it and my bike out of the weeds. Luckily I have one classmate’s phone number who was free to come pick me up. I was talking to Sully later about it, how alone I feel when riding and in general here and how in Colorado someone would have been out there with a spare tube. To which Sully added, “yah, and you’re a girl so you would have gotten so much free stuff in Boulder.”

Adjusting to riding has been hard, the one thing that has been constant in my life for the past four years seems to be crushing my soul here. I know it will get better, and over time who knows maybe I’ll really end up liking head winds and I’ll be really fast at changing flats and dodging cars. As a result of my angst from some of my rides I’ve started running. I was so upset (mainly from a car almost hitting me) with how crappy a ride was this weekend that the next day I just started running and kept running for 9 miles, it was definitely a much needed spirit journey.

2 thoughts on “Chasing the Sun”

Recently someone asked me how I got into my work— I half joked that as a kid I loved the story of the diphtheria antitoxin serum run to Nome. So it was somewhat fitting that my first ‘off the road’ trip in Alaska was to Nome. I spent a lot of time thinking about the 1918 flu, the diphtheria outbreak, and the current COVID response. The trip came at a time of a lot of personal turmoil figuring out if I was going to leave Alaska. It didn’t give me a direct answer of what I needed to do, no voice in the sky giving me a concrete "thou shall do X" when all my spreadsheets had failed me #StuckInACell #WrongValues #GetIt
Got a little too sendy during the Sunday Morning Service — jk still can’t turn right and still a woooooo girl 📸 @dpisgreat #TheMostFun #NotSarcasmJames #TakeMeToDirt #SundayMorningService #OfferingToTheDirtGods #InQuadsWeTrust #GoodSpotToStuffMyFrontWheel #AlsoSpilledMyCandy #ThanksForPatchingMeUpSafeDave
Got into a different bag of tricks this summer, same treats (Sour Patch Kids). Celebrated another year around sun (#NotMyBirthday) with a 100 mile human-powered loop around Anchorage, dubbed the Jurassic Classic. Finally catching up from the summer mania and wrote about it if you’re interested (link in bio). Full Monty of mountain biking, hiking, pack rafting, and road biking and a few logistics 😂. The best part was how many friends we were able to join (and also all the help with the logistics) — who wants to sign up for the winter version? #TrickOrTreat #EnduranceAdventure #JurassicClassic #AndItWentLike #PackRafting #Hiking #CultureOfSafety #EndlessSummer #Backcountry #NoBears #AllTerrain
Dearly Beloved, we are gathered here today to get through this thing called “life”.
Not sure which took longer, riding or writing the Kenai 250. Still reveling in the small moments and the people that made it an unforgettable 47 hours— like the lady that gave me $10 worth of turkey meat (best I ever had). Grande for always being up to ride at least 200 miles with me multiple times this summer. Rachel for giving me quick bike maintenance tutorials and a bike repair kit (plus bike bags). @chainreactionalaska for making it so I wouldn’t need the bike kit. Jorge for the ride down and place to stay and the camaraderie on the course. Kevin who probably covered more miles than we did and seemed to be everywhere I needed him to be. And the countless people who reached out after to say they had so much fun watching my little dot move along. It’s a fun little event and I think everyone should do it. Link to finally read what racing my bike for 47 hours was like 📸 @adrianbarniak #AndItWentLikeThis #PutTheFunBetweenYourLegs #SorryMom #Kenai250 #IJustFeltLikeRiding #GirlsWhoRide #Alaska #LastFrontier #GoJuliana
One day soon, again we’ll wander, we will roam. But till then there’s adventure to discover here at Nome.
%d bloggers like this: