The 15 hours leading up to the Queen of the Hills race at the Black Hills Fat Tire Festival did not give me high hopes for the race itself. Packet pickup was advertised as going till 5 and after arriving at 4:30 we learned that they left at 4. We went to the next location where we were told they didn’t have our packets there and it wouldn’t matter anyways because they didn’t have our race numbers so everyone would have to get them in the morning before the race. There really wasn’t a lot of information about the race on the website either, it’s a race that combines a hill climb, cross country race, and downhill time segments for the overall. I asked if there were separate  waves or different start times, no mass start. How the timing worked for the three separate categories- there will be people there so you’ll know which portions are timed. Are there any feed zones? There will be people with coolers that will have water. We were also told that the course was marked so Sully and I left to go try to preside. The course was marked but not in any fashion that really made sense of where to go and our only race course map was a strava file which left much to be desired. We rode around for 1:30 and only went 6 miles because at every trail junction we would stop and try to negotiate if the course went this way or that way. Let’s just say I was not impressed, and left feeling anxious about what was going to transpire the next day.

The morning of the race, having to get our numbers we arrived earlier than usual only to learn that it was going to start an hour later at 8 instead of 7 because of thunderstorms. We put our numbers on then went to get more coffee, or at least me more coffee. We came back after the rain had stopped and warmed up. They then started the call ups. They didn’t do separate waves but did divide us by age group, and there were so few in my age group that I ended up in the front row with all the boys. I still get really nervous racing with guys because I never know how it’s going to go. The race started on a bike path for about a mile or so before the hill climb begins, this helped tremendously to spread everyone out a little bit and have them fit into their proper position. Doing the hill climb even with a warm up doesn’t change the fact that my legs were immediately filled with lactic acid and it felt like my heart was beating out of my chest.

I followed the wheel in front of me and towards the top I had to hop off to scramble up some rock features, I apologized to the guy behind me who told me I was doing fine and to keep doing me. I made it up the climb and saw the people that indicated the time section was over. Keep pushing but continue recovering. I was focused on riding when a minute or two later I heard a familiar voice, “Kate, there is a snake, get off the trail!” I have been told that enough times to follow the voice up to Sully who was standing off the trail with a stick in his hand (I wish there was a photo). He was calling out to the other riders warning them too. I immediately hopped off my bike and ran towards Sully when I noticed a snake in the middle of the trail, coiled up, hissing, and moving around. I then remembered that snakes can jump (or so I’m told) and I moved a little faster. Sully got in front of me and we avoided it completely- about 15 seconds later we heard a shriek and later found out that a lady had run over it. That snake was pissed, and I’ve never stuck around long enough to see a snake get that reactive. I continued on Sully’s wheel for a bit thanking him for stopping otherwise my race might have been over if I was the one to run over it- he was soon gone as we got on a descent and he took off.

After the descent I got passed by a lady, and tried to stay on her wheel for a bit after she told me to hold on but I couldn’t keep pace with her for too long and watched as she slowly pulled ahead. The course flows really well with a few short climbs and two big ones. The course wasn’t terribly crowded either and on the back side of the course the distance began to grow between each rider. I was riding along looking to the switch backs above me to anticipate what was coming when I looked down and saw it slithering underneath me. I screamed having run over a snake and got chills running down my spine. Two minutes later I saw a course volunteer, “I ran over a snake back there!” “Was it a rattlesnake?” He inquired. “I don’t know but it could still kill me!” I didn’t know if it was a rattlesnake, but there are signs posted about them being over the hillside, and after the first encounter was not sticking around to find out.

The one unfortunate part of our preride mishap is that we went down this section that we were convinced was the timed downhill, it had a few drops, rock waterfalls and was really fun to go down. During the race I found out that we actually got to go up it. I made it up one of the features before having to get up and run the rest of the way up. The climb does feed into the timed downhill portion but it has more berms and less rock features. I started down and was passed by two guys but both were really nice saying they’d see me on the climb again. I got done and started lap two by asking if the snake at the top was taken care of. They didn’t know but figured I would check again at the top of the climb. I started up and again had to get off at the portion that I ran up on the first lap. This time I stopped and gave a guy one of my extra CO2s since he had a flat. All I asked in return was that if he got in front of me he’d warn me of any snakes. I also asked that of any guy who passed me at that point and throughout the rest of the race. I check with the volunteers at the top about the snake and they thought it was gone. I was still reluctant coming around the corner and the section where Sully called me off for the snake. I then realized the faster I went the less time I would have if I did see. It was gone and I continued on my way. The first lap they cut out about 2 miles due to the rain and then decided to put it back in on the second lap, which made for some very challenging mental math trying to figure out how much I had left and how much of my bottle I could drink. It didn’t seem to add much elevation which I was grateful for at that time and I got to the rocky climb sooner than I thought (miscalculation

on the mental math). I was nearly out of my one bottle and just really wanted water. I got to the top of the climb and there was a group of volunteers there, I asked if they had any water and they told me further up the climb before the descent. I went to get back on my bike and completely missed landing on the rear wheel, yeah still not sure how I managed that- they all kind of stared at me and I said, “actually do have tequila” and then I got back on my bike and climbed up. I reached the top of the climb and saw the two people who were suppose to have water. I was only 2-3 miles from the finish and it was mostly descent but the sun had been exposed long enough and I had been out of my bottle long enough that all I could think about was stopping. I wasn’t sure what the situation was so when I asked they took a bit to dig a Dasani bottle out of the cooler. I stopped for a few chugs and then handed it back and continued down into the finish. I got down to the finish and found Sully who had finished 3 minutes before me. I had saw him on one of the switchback climbs and tried to catch him but couldn’t do it. 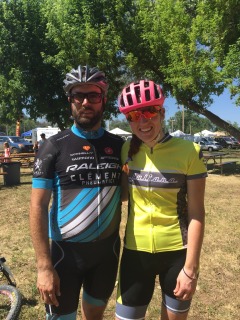 I finished 2nd overall for women and first in my age group. I was 1st in the hill climb for women, 2nd in the cross country, and 3rd for the downhill section. When I was talking to Sully beforehand I actually thought it would be reversed, with the hill climb being my worst section. I think if it hadn’t been delayed an hour the weather would have been perfect and one bottle would have been enough. I also thought the water station would be a little bit better since the race was 24 miles, but next year I’ll just bring someone to feed me. The race was actually a lot better than I was anticipating and it seems like it has huge potential to grow and really be a destination race. I’m grateful to have options to race close to home. It seems that all the people who race in SD are really nice–I always stress so much about it–so I’m always very thankful for that (I haven’t done a race yet in the state with anyone mean).

We spent the next day going over some of the trails on the Wildcat Classic course (a race in August that everyone should come to!) that is outside of my hometown. Mainly we just climbed up to go down the amazing descent at the end–but definitely worth it.