I thought I would keep rolling after Leadville and try to maintain my fitness into cross season and maybe even do some collegiate mountain biking. I did one race, and then had two weddings the next two weekends (both so much fun!). I was then going to try and race Madison the following weekend. However, after returning from wedding number 2, I  found myself on antibiotics for the first time in over 10 years. Which made me so grateful for the access I had to get them quickly but it still took a lot out of me, leaving me off the bike for over 3 weeks.

For the second wedding in Colorado I was able to sneak in some rides between wedding activities. I was able to meet up and ride with my friend Nicola before she left for Namibia. The last time we were able to ride together was when we raced Iceman…on a tandem and she was stuck behind me for 30 miles.

While I thought I would be spending the next weekend racing in Madison there was no way my body would have made it though the race but I still went up to hangout with Sully and his team. It was the first time I had seen him since Leadville (yay… long distance, school and race schedules). It’s also the first race I’ve been to in a long time that I wasn’t racing at–which was nice but also made me realize I’m not exactly ready to be a spectator.

This past week was fall break and I spent it with Molly and Abe down in Florida. I did some running to start building my fitness back up and to start working off all the candy I’ve been eating. 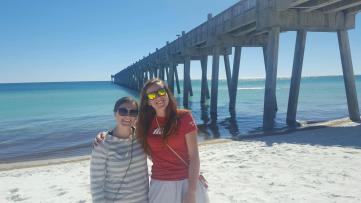 When I got back I decided to finally go for a bike ride. I took the cross bike because I’m going to try and race in 2 weeks (we’ll see how it goes with this much time off). The trail system had a few more exposed roots and down leaves than I was expecting so it led to some questionable handling skills but made me excited to take my mountain bike out there. And so 2 months after finishing Leadville, I finally feel like I’m ready to get back to riding.

Jered and Ashley Gruber also took some really great photos from Leadville that are amazing and worth sharing (even though it’s a little late on my part).

School has been very busy, about the same stress level as law school, but with much less anxiety. Our grades aren’t the sole result of one four hour exam at the end but instead with lots of weekly and daily assignments. Working on narrowing down my thesis but looking at viral sovereignty and how it plays out in the international legal arena so we’ll see where it takes me!

One thought on “Getting Back in The Saddle”