My first thought upon walking off the airplane and into the Hanoi airport was, “Oh wow, I’m tall”. Most days I think of myself as being 5’5-5’6″ even though I’m just over 5’9″. I blame this on the fact that Frank and Mary tower over me. I’ve never thought of myself as being tall before arriving in Viet Nam. Most of the people stood up and I soon realized that they looked much taller when they were seated on the plane. This sense of feeling like a giant hasn’t gone away.

I walked around a bit Sunday night but with the travel and lack of sleep on the airplanes went to bed at 7pm. Both Monday and Tuesday were holidays here, first International Labor Day and then celebrating the Fall of Saigon.  I woke up at 4am the next morning and was ready to go. I facetimed my parents because it was early evening for them and waited until the noise of the street crept in to let me know the city had awaken. I got up and went to walk around the Hoàn Kiếm Lake, or “Lake of the Restored Sword”. 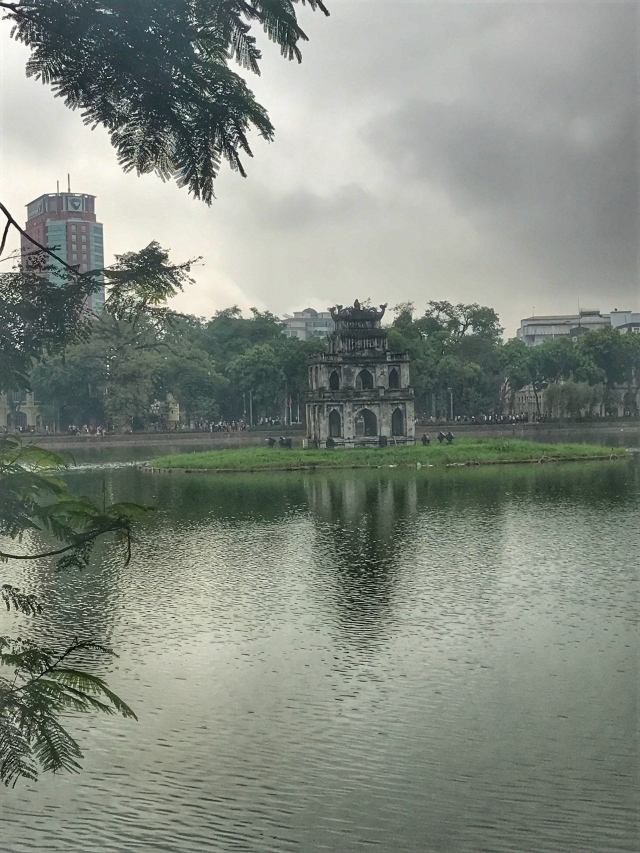 I also walked across the Huc Bridge into the Temple of the Jade Mountain. Right before the entrance two girls in front of me had to turn around and the man seemed to be gesturing to their shoes. Looking at my sandals I wondered if it was a problem but he let me pass. I later realized it was because they were wearing shorts and had to go back and put smocks on to cover their legs.

The temple is still active with people putting money (fake money) to burn as the offering.

I then met up with one of the guys here for lunch to talk about preliminary things, like areas to go running and what places are the best to eat.

Tuesday was the celebration of the Fall of Saigon, which is probably a similar feeling to a Brit being in America on the Fourth of July, but with less fireworks. Given that everything was still shut down I decided to make my way to the Temple of Literature and maybe the Viet Nam Museum of Art. Unfortunately both of those are off my paper map by a few blocks and ended up instead at Ho Chi Mihn’s Mausoleum and Museum.

There was a temple there as well, which I could not go in because of the shorts I was wearing and they didn’t offer smocks. I also didn’t go into the Mausoleum because it was closed, which I found a little ironic given the day of celebration.

I never found the Museum of Art, which is what I was really after. I would go up to a police officer and ask, “English?” and they would respond, “Hello” and that was the just of it so besides trying to point on the map any phrases I knew in Vietnamese that I did not butcher were not sufficient enough to get me to where I wanted to be. I took a cab back to the hotel, which was maybe my first and last cab ride given how terrifying the roads are here.

Yesterday I woke up again around 4 so decided to go for a run when the daylight broke. I decided to go run around Hoàn Kiếm Lake because it was close and that way if I didn’t want to do 6+ miles I could just cut it short whenever. Within about the first 5 minutes I soon realized why I didn’t see more runners, the humidity and the heat even at 5am was miserable. Plenty of people where out exercising, either walking around or doing group fitness, but not a lot of runners. Most of them in normal clothes and a few times seeing their clothes drenched in sweat I wanted to yell, “Cotton kills!” but didn’t.  The side street markets were also unfolding spilling out fruits, vegetables, and handmade goods. I couldn’t believe all the activity happening still in the wee hours. I only last 3 painstaking miles and then went back to my air-conditioned room and did yoga. I only had a dinner on the schedule for the day so spent most of the day just roaming around. The Old Quarter is a mix of tourists interjected with the locals. A lot of shops seemed tailored to tourists and then I turned a corner and found myself on a street that only sold coffins and memorial flowers.

(1) It doesn’t make much difference whether you look or not while crossing the road, there is always traffic so you just go–sorry mom!

(2) Not speaking anything more than really basic Vietnamese phrases means that I’m surrounded by thousands of people but still very isolated. My mom asked how I would do with it but it hasn’t bothered me yet, I’m actually enjoying it. I do worry that if I do something wrong and someone starts yelling I will have no idea why

(3) I have yet to a store that sells hairbrushes, and I’m in desperate need. I’m debating just cutting it so someone will have to brush it.