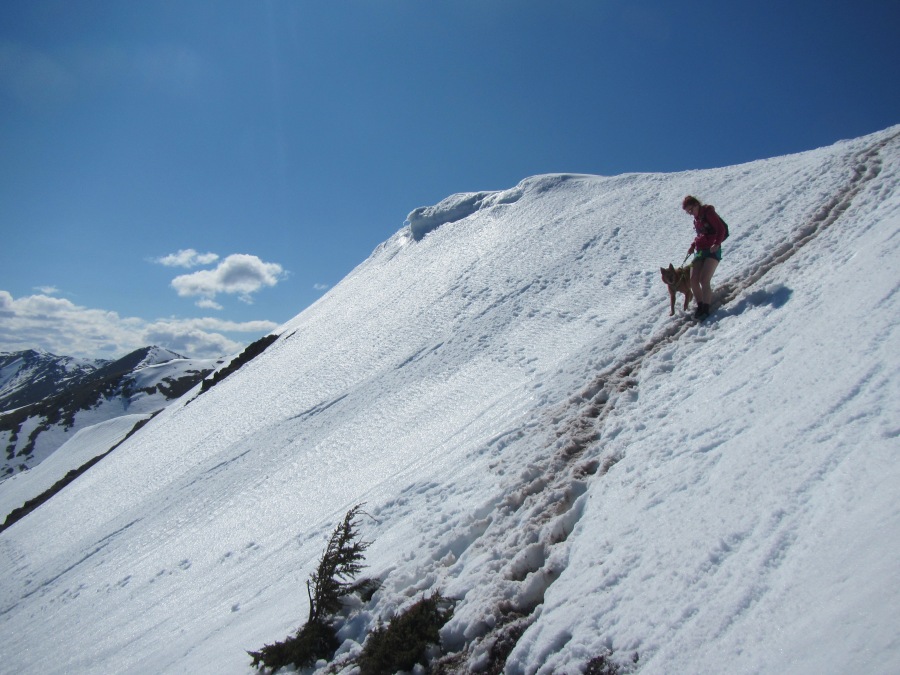 Alvin has taken to sleeping under the bed and even retreating there at moments during the day. After a quick google search it seems like dogs to do this to feel safe and to help them relax easier; after learning that I wondered if he had room for me under there.

The past two weekends I’ve been able to go camping. Which means life has simultaneously felt weird and normal. The Governor specifically addressed travel saying that you can go but cannot go into stores outside your community. The case count remains low here and with the physical distancing that took place early on gave the hospitals enough time to increase their bed capacity (and morgue capacity) so that if we do surge they are better equipped. As a result, some restrictions have been eased which I think we’ll know in about 2-3 weeks how that worked out.

The first weekend I found a friend to watch Alvin because apparently even the best trained dogs shred tents and not wanting to add a $300 tent to his running tab thought it was best to leave him home.

We headed down to Caines Head in Seward, I’m told it’s the trail that you take your out of state Alaska friends and also your girlfriend who doesn’t backpack. Perfect.

The trail beckoned us into the forest with lush tree coverage and dark, rich soil. We had an early start in order to make sure that we were able to cross a section while the tide was low and had plenty of time to spare. We topped off our water at a waterfall and headed to a fort that was used during WW2 to eat lunch but only after having to walk through the fort and hope that no bears were hibernating.

After that we headed to South Beach, which I kept calling North Beach and set up camp. Unlike winter camping it was insanely easy, no digging a hole, no shuffling around on skis, no having to eat a snack before hand; tent set up and ready to go in less than 3 minutes.

Having so much time we wandered around the beach, watched some sea kayakers, filled up our water bottles for dinner, made dinner, walked around the beach some more, found a dead otter somewhat near our tent. In my mind I was like oh great, that will attract the bears not us, which the next morning I was told that it could make the bears aggressive and they could come for us–ignorance is bliss.

In the morning I crawled out of the tent, with just about as many layers on as for winter camping but without a -20 degree sleeping bag. Again, the break down of camp proved much faster than winter camping and we were on our way.

As we hiked up we lost track of the trail covered up in snow and in a few places had to post-hole our way through. As communities begin to open up I felt a similar feeling to apprehensively moving forward on top of the snow: is it safe, will it hold me, and then occasionally finding my leg plunging through the crust and only being stopped by my hip on the surface. I had no idea that the snow remained that deep in places (deeper than a whole “Kate Leg”) and feel like with COVID cases we are in some ways only on the surface (again, call your congressional delegates about mass testing +contact tracing). We got down from the snow coverage and back onto the beach were we (I) haphazardly looked for animals in the water. We got back to the car and had just enough snacks to hold us over for the drive back but did put a to-go order in to a place in Anchorage to pick up on our arrival.

Last week I had a roller of emotions. It didn’t help that I was also about to start my period (not to add stuff to stereotypes but should be noted). I took a new job, well actually I took it a while ago but it’s in Washington DC so was waiting for more information on when I would physically need to be there. Initially thinking June 1 but then maybe end of June and finally got word that it would be mid-late fall. Which means working remote starting June 1 until we can be in the same space, but with the caveat of having to work east coast hours (for those of you at home, Alaska is in a separate time zone) meaning 5am-1pm in Alaska time. At first I was really excited about getting to stay in Alaska, I felt like I was just hitting my stride and settling in, getting friends, a community, have a boyfriend, have an Alaskan dog, starting to do more activities, have a sweet work remote gig, the dream.

But at some point the reality of me having to get to DC with the logistics of a pandemic began to cast a shadow over this ideal situation, besides having to go to bed at 8pm every night for a 4am start to the day. I initially thought of staying till the end of my lease, through July. Part of me was like yeah, do that, getting to DC is a problem for future Kate to deal with. But that would mean either moving end of July and in all likelihood flying (which I was adverse to all the germs on planes to begin with so no thank you at the moment) or staying here until I could get to DC which realistically might not happen until after fall. I have time now to drive, and it’s not ideal because even though it’s essential travel I can’t stop anywhere except for gas in Canada. Thinking of going to South Dakota and hunkering down with my parents Tenzen and Alvin (still not sure which one would end up sleeping in my bed) until I needed to head to DC (a 20 hour drive from SD vs. 70 hour from AK). I’ve consulted with all my friends in public health and my therapist about what to do. I think with things opening up in about 2-3 weeks we’ll see how it’ll play out and the last day I can make a run for home would be May 25 in order to get there and start work on June 1. Right now I’m leaning towards going home but I feel like I’m leaving this safe cocoon in Alaska for a hot zone/inferno in South Dakota. It could be a game time decision.

Maybe some of this coupled with it being Alvin’s first overnight camp trip was on my mind when I had Alvin hooked around my waist and hiking up Point Hope. He’s been really good (mostly for maybe having no training in his life) but does pull sometimes. I was seated on the ground digging something out of my pack when he saw a puppy approach and he lunged for it. The belt had slid up above my hips and onto my stomach and so when he lunged, he performed the heimlich maneuver on me, which felt like getting the wind knocked out of me. And then just for good measure he did it two more times. And then I started crying, and it’s never about what you’re crying about–like when I bought the wrong size bed, it wasn’t about the bed it was about having a brain injury and dealing with that. It’s like all this uncertainty hit me and I couldn’t see how I was going to move forward.

Luckily Kevin un-clipped Alvin from me and took him to give me some space. Kind of reminded me of when your mom is on the verge of an emotional breakdown (as portrayed in TV shows) and your dad is like “okay kids, let’s go get some ice cream”. We made it to the summit without any other incidents and then Alvin took a nap.

Going down he was much better, probably from getting tired going up. We would alternate between jogging and hiking down with him.

We got back to camp and met our friends who also have a rescue husky. Talking to them made me feel a bit better as the owner told me she cried multiple times the first 6 months of having hers and now they take her biking, hiking, and running. Because the other dog was off-leash eventually we decided Alvin could go off too. In the moment of unclipping him from his tether saw the rest of my evening spent looking for him on the hillside. Fortunately, that did not manifest and he stuck close to us, the other dog, and the campsite. It was actually really fun to watch him play with the other dog and at some points it’s like he realized he was a dog. The other dog started digging a hole and then Alvin realized he too could dig a hole. Then came the moment of truth. Bedtime. Was Alvin going to hear a noise in the night and shred our newly acquired $25 craigslist tent (in case he did shred the shit out of it, would only be out $25….).

He was a champ and I’m not sure he moved positions the whole night, no holes in the tent, no holes in our sleeping pads. Here’s hoping I can train him to sleep more on my feet and keep them warm.

We packed up the next morning and shuttled Kevin for a pack rafting adventure. I walked around a bit with Alvin but mostly sat on the beach reading a book that had been on my list since September only pausing once to briefly entertain what my life would look like without the pandemic– no Alvin, more bike riding, I’d probably already be on my way to DC for the June 1 start so I could stop and ride my bike and see friends along the way. And yet, sitting on that beach felt completely normal.

We’re going backpacking again this weekend but combining the two last weekends into one: Backpacking with Alvin. Last weekend we just car camped with him, but will continue to haul that beef-cake of a tent around in the backpack just in case though.