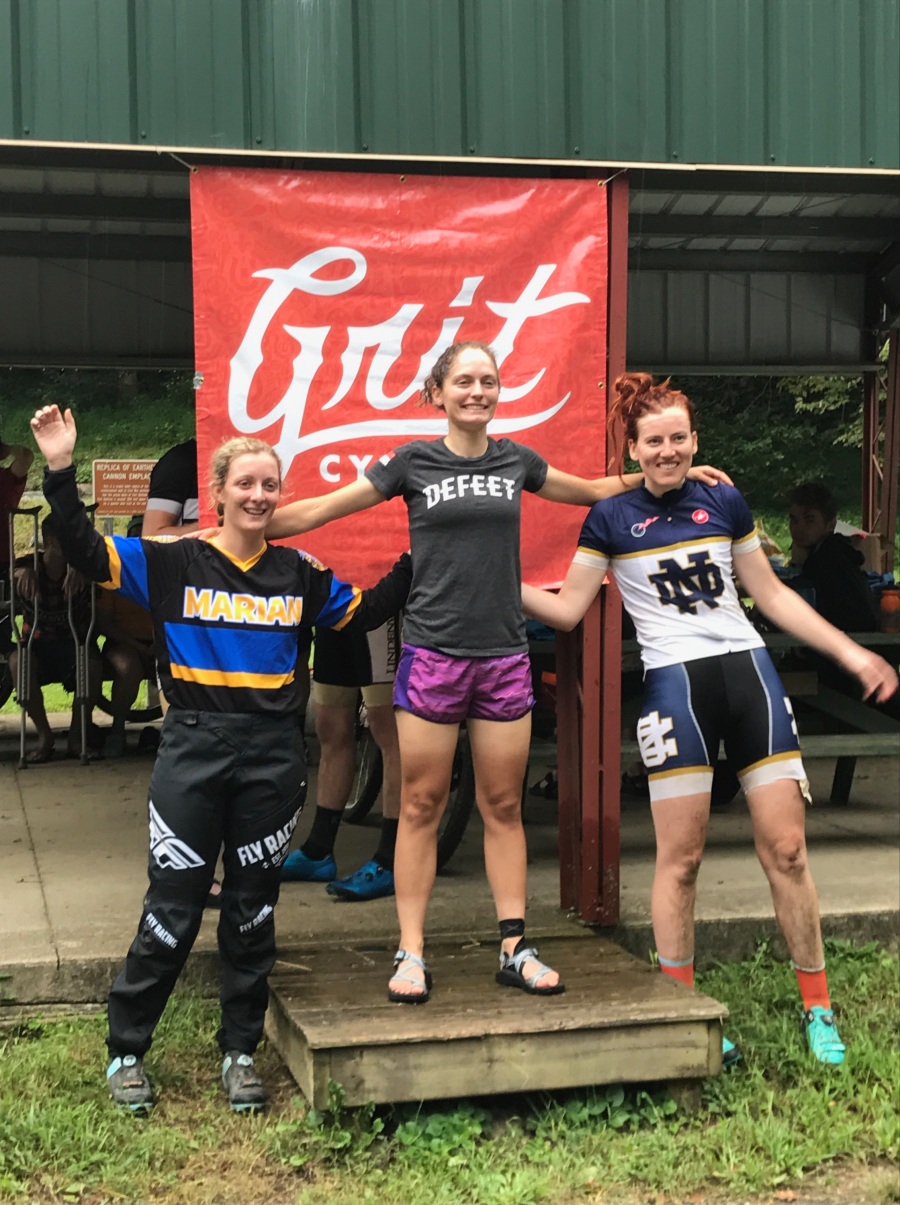 After the Maah Daah Hey 100, I took a week off and then started back to training. I knew I wanted a full season this fall and end in December with Cyclocross Nationals. In the past, I’ve usually taken about 3 weeks to a month off mid-August and then dabbled aimlessly for racing in the fall. Each year I’ve been in school (4 Falls) I always have the same thought of getting more in shape for shorter distances but then keep racing 100 miles. This year I’m making more of a concrete effort to get in shape and stick to shorter.

I had some issues with communication this summer on when a new bike would arrive. Part of the reason I left my old bike in Colorado, twice, only to have to figure out how to get it to Indiana. Less than ideal.

All of my stressors manifested themselves in this sole issue. It came flowing over when it was two weeks after the said ship date and no word on the arrival or the location it was going to ship to (yeah…). I found out the arrival date would be another month which really only put it here for nationals.  I was sitting at my kitchen table, crying over this issue when Sully reminded me that bikes should be fun, I agreed. Because my best friend, who is a therapist, was on her honeymoon, and there were no 100 mile races to be found, I signed up for a real therapy session with the counselor at the law school. I was hesitant about going, mainly because stress around bike racing is not really a common law student problem but it seemed kind of silly for how much it was impacting my life.

I went and talked through everything in 50 minutes (I’m cured!) and came to the realization that because I’m forging my own path forward (avoiding corporate law) it leaves a lot of questions up in the air of what next year will look like. Right now everything and everywhere is a possibility, which is amazing and terrifying! As a result I’m focusing so much on wanting good results this fall because in the back of my mind I’m like what if this is it, what if this is my last season. If I do terrible can I justify  racing when I have other things going on in my life that need priority too. The therapist thought maybe because bike racing is the one thing I can control, meticulously, with the racing schedule and all my training plans that I’m focusing so much on it as a result.

It’s somewhat comical that I decided to try and control the one area of my life that does not yield well to control. I haven’t had a clean race this season, either with mechanicals or crashes and have been able to roll with it.

The first race of collegiate mountain bike started 2 weeks ago for me. The cross-country course was reduced from 4 laps to 3 the morning of. I didn’t think much of it because a 15 mile race vs. a 20 mile race is still the same in my mind compared to 100 miles. During the race, though, I was so glad we were only doing 3 laps. The race started on pavement and went up a climb of about 10-15% grade for 1/3 mile or so. Just enough to get my heart rate abnormally high. After hitting the trail I had to scramble with my bike to get over a log and then probably lost 30 seconds trying to get back on because my heart rate was just coursing adrenaline throughout my body, I scurried to the top of the hill to  find an even piece of land to get on from. The course was relentless, even the downhills offered little recovery as they were littered with rocks or technical turns that required ever vigilance. It was all I could do to drink.

Fortunately the start of the second lap took out the pavement climb and instead offered a traverse over the hill before zig-zagging up to connect to singletrack. On the traverse over I washed my front wheel out and went down, it happened so fast I didn’t even have time to react and took the brunt of the force with my knees and hip (better than my face!). I made the mistake of putting my Garmin mount from my road bike on my mountain bike (in the midst of switching parts over, I convinced myself it would be finnnnne! Jokes on me). The mount snapped off, luckily I found my Garmin lying in the trail and snatched it up and stuck it in my jersey pocket. The rest of the race was uneventful, and mostly just slogged away at the trail for an hour and 40 minutes. I got done and finished 3rd, more by default, only 4 women started and one dropped out due to a mechanical in the first lap. I thought she was behind me the whole time, which was nice to at least have that thought to push me. 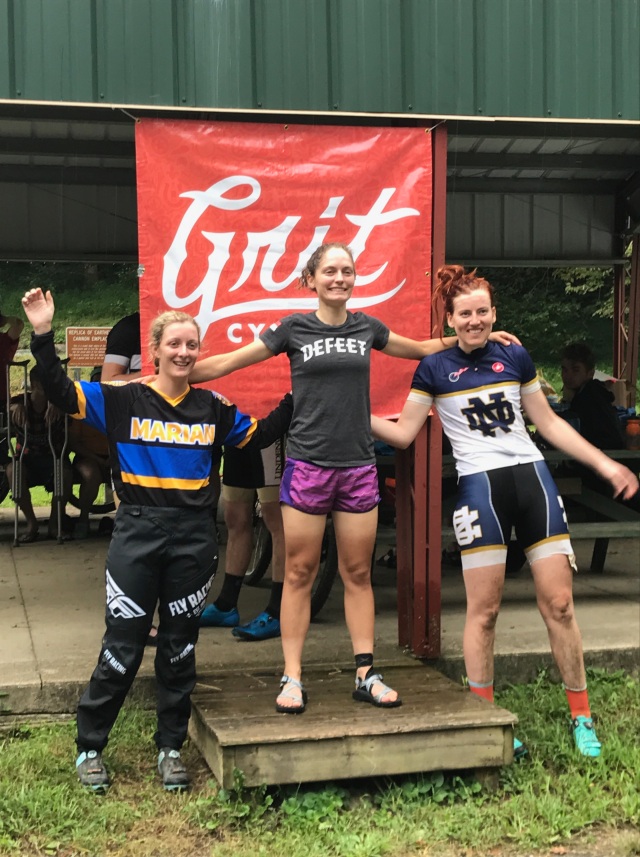 The next morning I debated doing the shorttrack race. It had rained overnight, so much so that I got a flash flood warning on my phone. Unsure of what the course conditions would be like I was hesitant to register before the first race of the day. The crew did a good job of restructuring the course at the last minute and avoided the areas that were flooded. To add a dimension to the now the mostly grass course they put in a death spiral. You ride all the way in for about 4 circles and then turn and unwind out. After the first race I saw that the bikes mostly picked up pieces of grass but not a lot of mud so decided to race (not looking to replace my drivetrain…again). They combined the A and B women so our field grew to about 9. After the pavement start we immediately hit the soft grass. It was slick and took one girl down when she slid out of a corner. I followed the train into the death spiral which was a really terrible idea because as I was circling in, others started circling out, while more were circling in and for someone who gets motion sickness, it was all I could do to orientate myself, and not throw up.

We raced for 25 minutes and after sitting on the 3rd place girl for 3 laps through the death spiral knew that I would be sufficiently dizzy if I followed her again, when we hit the pavement I went around and worked to put in some time in between the start of the death spiral, it worked but I still wasn’t completely out when she was entering but it was at least better. The race finished with pretty big gaps in between the finishers, I think I was almost 2 minutes from first place and 30 seconds behind 2nd (the girl who crashed and got up, yeah she’s fast). 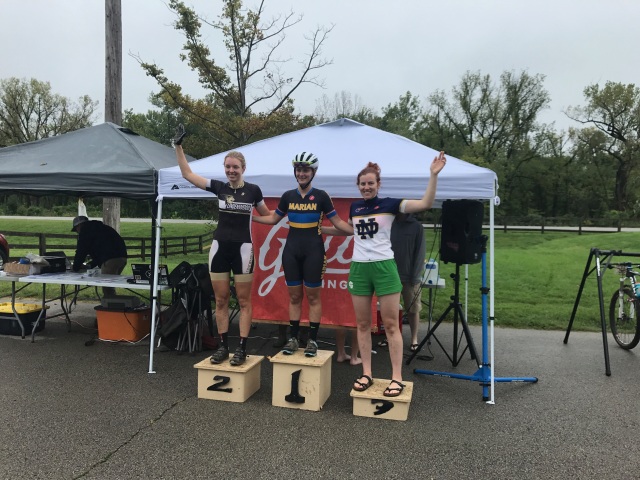 I felt good with my results (even if cross-country was by default). Since I’m trying to get my top end fitness firing for shorter distances, the weekend was more to figure out where I was and where my head goes during such short events. It’s much easier to stay in the race, I often find myself after 7+ hours of racing being like, where am I, what am I doing here, what food do I get to eat, yeah when it’s only 25 minutes those questions don’t come up…at all.