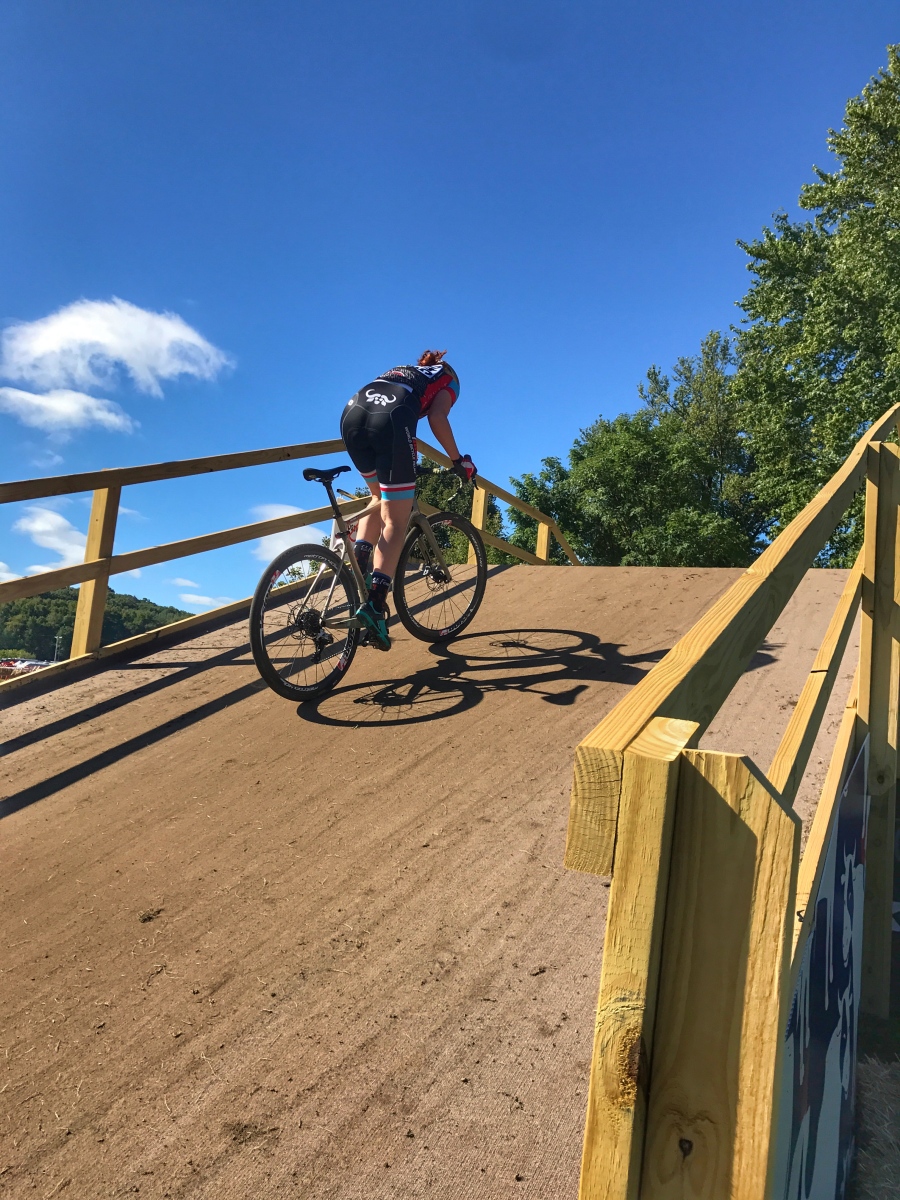 To catch you up on the logistics of my bike,  it showed up in South Dakota and by the grace of God, Sully would be coming through in 6 days, so I sent a shipping label to South Dakota and didn’t think much of it until 4 days later when I got an email notification that it had shipped, putting it here 2 days after Sully. Perfect training for therapy. So then I had this bike in a box in my garage because no way am I touching this super expensive bike with limited mechanical knowledge.

Last weekend  I woke up sick, clearly my immune system didn’t take into account my racing schedule. Friday morning I scratched going to St. Louis and emailed my coach and was granted permission to take the weekend off racing and riding.  I texted Sully, “scratched St. Louis, half tempted to come to Madison if you would have time to build my bike” he texted back and asked if that would be the best thing if I was sick. Uhh, maybe not but it’s not like I’m going to race so it’s just drive time.

Saturday morning I woke up and loaded the boxed bike into my car. I put limited riding gear in and left my cyclocross bike at home because I knew if I got to the race with a bike I would want to race and I really shouldn’t race. I got to Madison just after Sully beat 100 men in his field. I heard them call for Women Cat 3 and figured the race started in 10 minutes. Sully asked if I wanted to race and use his bike, “nah, there isn’t enough time” and unloaded the box from my car.

I got back to the tent and looked at the schedule, oh actually the race is in 35 minutes. Hmmm. “OKay, I think I might race, I’ll just go see if registration is still open.” I went to registration and after a bit delay got registered and back to the tent. I quickly changed and adjusted the saddle height on Sully’s bike. I ran over to another tent that has a major nutrition sponsor and grabbed some chews as I had only opted for coffee for breakfast. I had just enough to eat some chews, pedal backwards to check the seat height, and head to the staging area, clearly the optimal warm-up.

As they were calling names, mine never came up. After all were called, I rolled up to the officials and gave them my number and slotted into the last spot for the category. They put us in the gates a little prematurely and still having some time decided to warm up by doing some calisthenics. If that wasn’t enough to show how unprepared I was, I asked the girl next to me how long the race was going to be. Yikes.

The race started and I got stuck behind some traffic going into the first corner. There was one pretty good line but plenty of room to maneuver around other riders. I settled into a comfortable pace thinking I should spend the first lap warming up. About 3 minutes into the race I realized I had no idea how to shift, I had never ridden the brand and only remember someone briefly explaining it to me a few years ago. After a few shifts putting me into a harder gear I was able to figure it out just in time to hit the one steep hill. The course was was maybe the most ‘cross’ course ever. After the hill was a little rock hop, followed by a rock step-up, some log stairs, a flyover, barriers, a slight off-camber slope, a fly-over, and another fly-over just after the start. A lot of getting on and off the bike.

The start of the second lap provided some space but I took a terrible line going down the hill that turned into the uphill. I cut the corner a little tight and came out wider than I wanted but had salvaged my poor decision. Or at least I thought until out of the corner of my eye I saw someone who had gone wide come up from behind and run straight into my handlebars, tangling us both up and taking me down. Being on the hill, I untangled it as people passed by and ran up the hill as fast as I could. I focused on staying smooth and worked to stay in front of those behind me while working to catch those in front of me. It kind of worked, I didn’t lose any more spaces but only made up 2 or 3 from the crash. Most of the spectators were hanging around at the top of the steep hill and before the rock step-up. On the third lap I got to the top and took a beer hand up but immediately had to dismount for the step up and then remount and in the midst of a one-handed remount I dropped it. Not that I was going to drink it anyways because it’s not tequila, but sometimes you gotta give the people what they want.  The last lap was also pretty uneventful. Still not being able to breathe great I feel like I was right on the cusp of pushing it but not over doing it.  I finished 18 out of 39, which I felt okay with but also showed me some weaknesses early in the season. The plan as of now is to stay off the cross bike until end of October, with three more mountain bike races to go.

Oh yeah, and I got my bike all built, so stopped going to therapy because clearly all my stressors are gone! haha (just kidding)– No maiden voyage yet, but it’s coming!